You already know everything in Berlin, have done many tours, Brandenburg Gate and Gendarmenmarkt bore you?

Within the framework of our private tours we offer you, in addition to the popular overview tours, special walkingtours on a wide variety of topics.
We are specialized in demanding and curious Berlin visitors for whom standardized public tours offer too little in terms of content, quality of the guides or the vehicles.

Unlike public tours, you have your own personal guide who will be happy to answer your questions and design the tour according to your wishes.

This way we offer you the opportunity to enjoy the city beyond the mass tourism – far away from the hustle and bustle at the Brandenburg Gate. Visit with us e.g. the exciting districts of Kreuzberg, Prenzlauer Berg or Friedrichshain – Kieztouren through the real Berlin, in a private and relaxed way with a knowledgeable city guide.

A selection of our exciting Berlin insider walking tours: 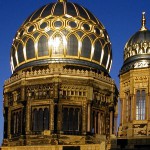 Jewish life in Berlin – Before 1933, the Spandauer Vorstadt, parts of which are also known as the “Scheunenviertel”, was a quarter with a high Jewish population.
The consequences of Nazi rule have not yet been eradicated, but there is once again a steadily growing Jewish community with a rich cultural life.
On this special Berlin walking tour, our city guides will introduce you to the Spandauer Vorstadt also from the perspective of Jewish life in the past and present.
Highlights of this tour:
Rosenstr. (site of the first synagogue), Hackescher Markt, Hackesche Höfe, Sophienstr., Auguststr., Koppenplatz, Große Hamburger Str. (“Tolerance Str.”), Jewish School, oldest Jewish cemetery with tombstone of Moses Mendelsohn, Oranienburger Str., New Synagogue, Heckmannhöfe, former Postfuhramt …

The elegant West of the “Roaring Twenties” 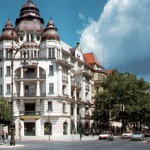 A fascinating city walk through Charlottenburg, once the richest city in Germany – independent until it became a Greater Berlin in 1920.
Learn more about the history, significance, inhabitants and admirers of the famous boulevard of the “rich Berlin West”. Experience the unique charm of the side streets, which can still be experienced today.
Accompany our city guide on an illustrious journey through time and get to know personalities who shaped the cultural life of the 1920s – sculptors, writers, actors …
On this exciting tour you will also be able to enjoy some literary tastings – let us surprise you Residents of the Kurfürstendamm:
August Gaul (sculptor), Adele Sandrock (actress), Heinz Berggruen (art collector), Tilla Durieux (actress), Mascha Kaleko (poet), Rene Sintenis (sculptor), Jeanne Mammen (painter) and many more. 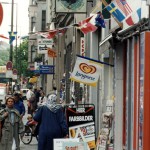 In the course of the population explosion of the 19th century, Kreuzberg became one of the typical Berlin tenement housing estates built around the old city centre.
After the war, the part of Kreuzberg that we would like to show you on this city tour was considered the Montmartre of Berlin – somewhat run-down perhaps, but not as destroyed as the neighboring neighborhoods.
When the Wall was built, Kreuzberg was suddenly surrounded by the Wall on three sides. It was able to develop a social biotope of its own. Even today – 25 years after the fall of the Wall – Kreuzberg is still something very special. A motley melting pot of different life forms and ideas – a wild mixture of migrant and trendy neighbourhoods. Not free of social conflicts and clashes between different political groups, but endearing in its diversity.
But the people of Kreuzberg agree on one thing. They want to prevent gentrification at all costs, which is turning the neighboring East Berlin districts (Friedrichhain, Prenzlauer Berg) more and more into the playground of the wealthy.