30 years Fall of the Berlin Wall  – our Cold War Tours 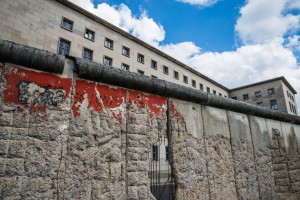 When on Nov 9th 1989 the GDR (DDR) Secretary of State Schabowsky announced during a press conference that “as far as I know, from now on the citizens of the DDR are allowed to enter West-Berlin”, nobody could believe that.
The news spread, more and more people set out for the transit points to West-Berlin. The border guards had no order how to deal with this situation. And as thousands of people shouted “Open the WAll!” finally the nervous guards gave up and opened the access to the free world. A miracle – no shooting, no bloodshed. The DDR collapsed just by the way – 28 years after they isolated West-Berlin and started to build the Wall, and 70 years after the founding of East-and West-Germany as own states.
Reason  enough for us to offer especially this year fascinating Berlin Wall tours on foot or with a coach to more or less known places of Cold War, like Checkpoint Charlie of course, Eastside Gallery, the Wall memorials, Brandenburg Gate and many more. A view deep inside a time, when Europe was divided into 2 power blocs (USA/Sowjet Union). Learn about the steps in deep Cold War, about the history of the Wall, how it was to live in the divided city. And also hear what happened after and what impact the division of Germany still has.
Our Wall tours are must in the year 2019. Do not miss them. Our professional and knowledgeable guides are looking foreward to show you around.

Here you will find our Cold War/Berlin Wall tours:

Berlin Facts
Did you know that every day there are about 500.000 visitors in Berlin?
Or that 30% of Berlin are forests and parcs?
More interesting facts and Berlin superlatives you will find here…