Through the old jewish quarter, 2 hrs. 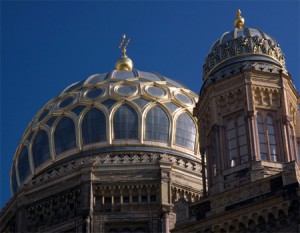 This individual tour is best for schoolclasses and students who want to learn more about the rich jewish history and culture in Berlin.

Walk with us through the cosy lanes of “Spandauer Vorstadt” and see e.g. the factory of Otto Weidt, the Berlin Oskar Schindler, Hackesche Höfe, Sophienstr., where the first jews settled down. Be impressed by the New Synagogue with its moorish dome and learn that the oldest jewish cemetry opened in 1671.

Also our guide will talk about what happened here during the “Third Reich”, when the Nazis destroyed the cemetry and killed 55000 Berlin jews in the concentration camps.
Today Berlin has a again a growing jewish community.

"Very interesting Berlin tour!"
"Excellent walking tour
at the Berlin wall!"
"Thank you very much for the
great and inspiring tour!"

30 years Fall of the Berlin Wall -
our special anniversary tour