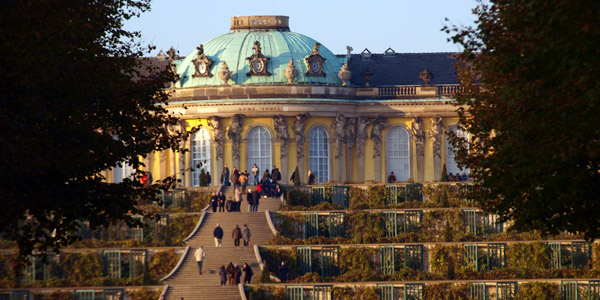 Beautiful Potsdam is located about 35 km (23 miles) southwest of Berlin and can be reached easily by commuter trains (S-Bahn).
Once the favorite residential town of the prussian kings, where they seeked refuge from polital business in Berlin,  Potsdam is rich of historical sites, such as palaces and baroque quarters. The most known palace is for sure Sanssouci palace, but there are more – like the grand New Palais or the Orangerie Palace of the 19th century.
But Potsdam has also quite a few important Cold War sites, such as Glienicke Bridge, the border between West-Berlin and GDR –  famous because of spy exchange – or Cecilienhof Palace, where the Big Three (Truman, Churchill, Stalin) signed the Potsdam agreement after the war.

If you book early, we can arrange an inside visit of Sanssouci Palace